What is Dustless Wood Floor Refinishing?

What is inolved in sanding, refinishing, and installing wood floors?

The history of hardwood floor refinishing spans centuries. [19th Century Hand-Cut Hardwood Flooring] Refinished hardwood floors as we know them today were not commonplace until the late 1800’s. For centuries before this time, hardwood floors were restricted to only the wealthiest of people. Expert craftsmen would work on a single floor for years, intricately cutting and laying down patterns by hand. These works of art were typically parquet floors. Having a parquet floor was a definite indicator of one’s upper class status.

The only other hardwood flooring to be found up until the late 19th century were usually rough, unfinished planks in the homes of commoners, which relied on foot traffic over time to smooth them down. The hand-sawn planks used to produce the common hardwood floor were butted against each other during installation. However, due to the natural contraction of wood due to cold weather, gaps would open between the planks which allowed cold air to pass into the living areas from the basement. Also, small objects had the tendency to fall into these gaps and be lost in the depths below.

A major advancement in hardwood floor installation came from a very simple improvement developed in 1885.The invention was the side-matcher, which created wood planks with a groove on one long side and a tongue on the other. This allowed the boards to interlock and could allow hollow-backing on the boards which allowed them to conform better to subfloors. The hollow-backing of boards also allowed the planks to become thinner, which allowed more wood to be procured at the mills and helped to reduce hefty freight charges. All of these advancements, along with the improvement in mill technology during the industrial era, led to a reduction in pricing for hardwood floors and soon it would become widespread to the point that we know it today. 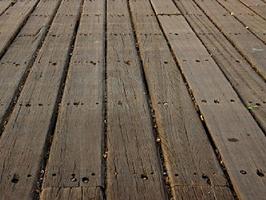 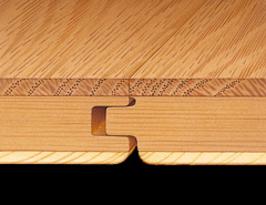 Up until 1926 and the invention of the portable electric belt-sander, hardwood floor refinishing was a labor-intensive and time consuming process. ­ Instead of sanding the floor, workers would get down on their hands and knees and pull scraper blades across the floor until the wood was uniformly exposed. The floor was then finished with two coats of orange varnish and then waxed. When marred or worn, the shellac was scrubbed off and then reapplied.

The history of hardwood floor refinishing would be forever changed with this next innovation. With the invention of the electric belt sander (used for the majority of the room) and edger (a smaller machine used to get as close to the edges as possible) in the 1920’s, the process of hardwood floor sanding was streamlined. The hardwood floor refinisher uses a series of sandpaper on the machines to remove the polyurethane and any surface imperfections from the wood. It is recommended that the floor be sanded in three passes of the machines – starting with a very rough grit of sandpaper, following with a smoother grit, and finishing with a very smooth grit to achieve the best results. Any areas that the machines were unable to reach must then be scraped out by hand.

Once the floor is bare, a sealer is applied to close the grains and allow for a smooth and even application of polyurethane. Once the sealer has dried, the hardwood floor is sanded using a buffer and an extremely smooth sanding screen. This assures that there will not be a rough finish when the polyurethane is applied. Next, layers of polyurethane are applied to the hardwood flooring and allowed to dry. Many contractors still use an oil-based polyurethane, but this is not recommended and no longer necessary due to the advancements in water-based polyurethanes. Oil-based refinishing products are particularly toxic with high VOC (volatile organic compound) ratings. Although sanding is still a viable process, great care should be taken to minimize the inherent health issues that arise. 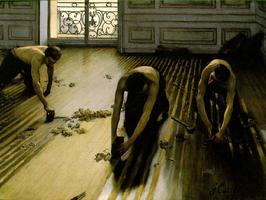 Dangers of Dust and Oil-Based Polyurethane

Although sanding has come a long way throughout the history of hardwood floor refinishing there are still some downsides to the typical process as performed by a lot of contractors in the industry. Two aspects of sanding hardwood floors that present problems are the creation of dust and the use of chemicals high in toxins.

Sanding is in no way a dustless hardwood floor refinishing process. When an area is to be sanded, all furniture and wall-hangings need to be removed before the process begins. Plastic sheeting should be sealed over all doorways to prevent dust reaching other areas of the home. Finally, an exhaust/ventilation system should be set up to remove dust from the room and respirators should be worn at all times. This is due to the fact that dust presents a variety of health risks. Breathing the particles may cause allergic respiratory symptoms, mucosal and non-allergic respiratory symptoms, and cancer. The highest quality machines today also minimize the dust emitted into the air to avoid these hazards during the hardwood floor sanding process.

Proper ventilation is of the utmost importance in when an oil-based polyurethane is used. Oil-based sealers and polyurethanes have high VOC levels (445 G/L as opposed to water-based polyurethane which is usually around 200G/L) that can cause permanent brain and nervous system damage with exposure over time, as well as dizziness or headaches in the short run.

Wood Vitalize Dustless Hardwood Floor Refinishing process is the culmination of centuries of advancements in the hardwood floor industry. After all, we have come a long way in the history of hardwood floor refinishing from scraping floors on our hands and knees - so why should the advancements stop there? Hardwood floor sanding is a necessary process at times, but the dust and chemicals associated with it are not ideal.

In the 21st century it is no longer necessary for your home to be infiltrated by dust that is not only tedious to clean up, but can also cause respiratory dysfunction and even cancer. Additionally, there have been improvements in the chemical makeup of finishes that drastically reduce the risks for the brain and nervous system damages that are associated with traditional oil-based polyurethanes. The Wood Vitalize dustless hardwood floor refinishing process is an eco-friendly, non-toxic method that does not require you to leave your home for days on end to avoid the harmful dust and fumes of the traditional hardwood floor sanding process.

Wood Vitalize Eco-Friendly Hardwood Floor Refinishing Process begins with the use of specialized dustless floor machines. Our machines prepare the floors while using eco-friendly methods to remove grime, grit, and soils embedded in the wood. It is the presence of these foreign elements that damage hardwood floors over time and cause them to appear dull and lusterless. Our wood floor refinishing methods treat the floors to bring back the color, beauty, and liveliness they once had. Finally, the floor is refinished with a water-based, professional grade polyurethane. This polyurethane has drastically lower VOC ratings than traditional polyurethanes. The drying time for our polyurethanes are another benefit of the process. Our polyurethanes dry in under two hours – compare that to traditional oil-based polyurethanes which can have drying times of up to 24 hours or more.

You will notice that dust has not been mentioned in the description of our process. That is because this is a completely dustless hardwood floor refinishing process! The Wood Vitalize techniques ensures that all of our work remains where it belongs – on the floor! Dirt and grime is captured and completely removed by vacuums throughout the process. This eliminates not only the inherent health and ecological risks of dealing with dust, but also the nuisance of dust in the work area altogether! This means that you can leave your pictures/paintings/etc. on the walls of your home while the dustless hardwood floor refinishing process is done without worrying about them being soiled or damaged. Also, if you are working with limited space in your home, furniture can be left in the room while our specialists work. In these cases a “half and half” method is employed. Any furniture can be moved to one side of the room while the floor is refinished. Once that half is complete and allowed to dry, the furniture is moved onto the refinished area and the rest of the room can be completed! This is a wonderful option, especially for apartment dwellers, that is not practical when sanding a hardwood floor.

The Wood Vitalize Eco-Friendly Hardwood Floor Refinishing process reduces health risks, is friendlier for the environment, non-toxic, and all of the work can typically be finished within one work day. That’s right – one day! With our process you can be walking on your newly refinished wood floor by dinner time as opposed to the typical 3-5 day work period you would encounter with traditional refinishing processes!

There are many different hardwood floor types on the market. Hardwood flooring varies in color, texture and hardness. Although color and texture are a matter of taste, the biggest pros and cons of most wood types come from their hardness level, how absorbent they are and how they react to humidity/temperature. All hardwood flooring is rated on a hardness level according to the National Wood Flooring Association. The harder a wood is, the more resistant it is to denting from furniture, traffic, etc. How absorbent a wood is becomes important if staining is required. Finally, all wood contracts in the winter when the weather is dryer (and this is compounded by indoor heating) and expands in warmer weather when there is more moisture in the air. This is due to the fact that wood holds a certain amount of moisture and it is either drawn out (as when the weather is dry, causing the wood to contract) or the wood holds more moisture (during humid weather, causing the wood to expand). The expansion and contraction of a hardwood floor is completely normal and, in fact, it is for this very reason that some spacing between the boards is beneficial. The cracks that might appear in some floors due to contraction will disappear when the weather is warmer and the hardwood floors expand.